Synopsis
Chã das Caldeiras is a little village located in Fogo volcano’s caldera, in Cape Verde. It is one of the most active Macaronesian volcanos in the North Atlantic Ocean. November 23rd 2014, 19 years after its last eruption, Fogo erupted again. Like in 1995, Chã’s population was evacuated by corresponding authorities and moved to other villages. 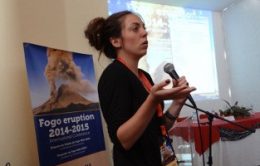 She hold a BA in Geography and Environment from the University of Paris. She has also different master studies related to development and geography in developing countries. She is now doing her doctoral dissertation on Geography, more specifically, on Cabo Verde’s Fogo volcano at the University of Toulouse. In addition, she has presented several short films about volcanic phenomena.