FIREBALL takes us on an extraordinary journey to discover how shooting stars, meteorites and deep impacts have focused the human imagination on other realms and worlds, and on our past and our future. 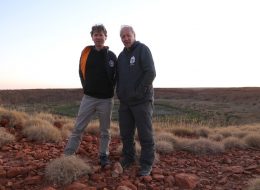 Werner Herzog was born in Munich. He has written, produced, and directed more than 70 films, published books of prose, staged several operas, acted in films and TV (Jack Reacher, The Mandalorian), and founded the Rogue Film School.

Clive Oppenheimer is a Professor of Volcanology at the University of Cambridge, with wide interests spanning volcanic processes, hazards and impacts, geoarcheology and cultural heritage. He has participated in over thirty film and TV productions in assorted roles including narrator, presenter, cinematographer and director